Space Creation: In Leadership and Life

No air means no life.

Yet so often we forget this basic fact.

We strip the air from our schedules like it’s the plague. We sprint instead of walking; we react rather than daring to reflect.

As we push forward in our perpetual panic, we miss where we are. We don’t see the ground beneath our feet. We run past our lives, and then we wonder where it all went.

Giving more air to the seeds of our lives—to think, to feel, to be—is a task that stands before us all. Our lives, quite literally, depend on it.

There is a skill that can assist us in this pursuit. With cultivation, it unveils creativity, ingenuity, and strategic thinking. It allows us to embrace uncertainty and to dance with the unknown. And it’s a practice that helps leaders to lead and their followers to thrive.

This skill is called space creation.

Space is the emptiness around a somethingness. 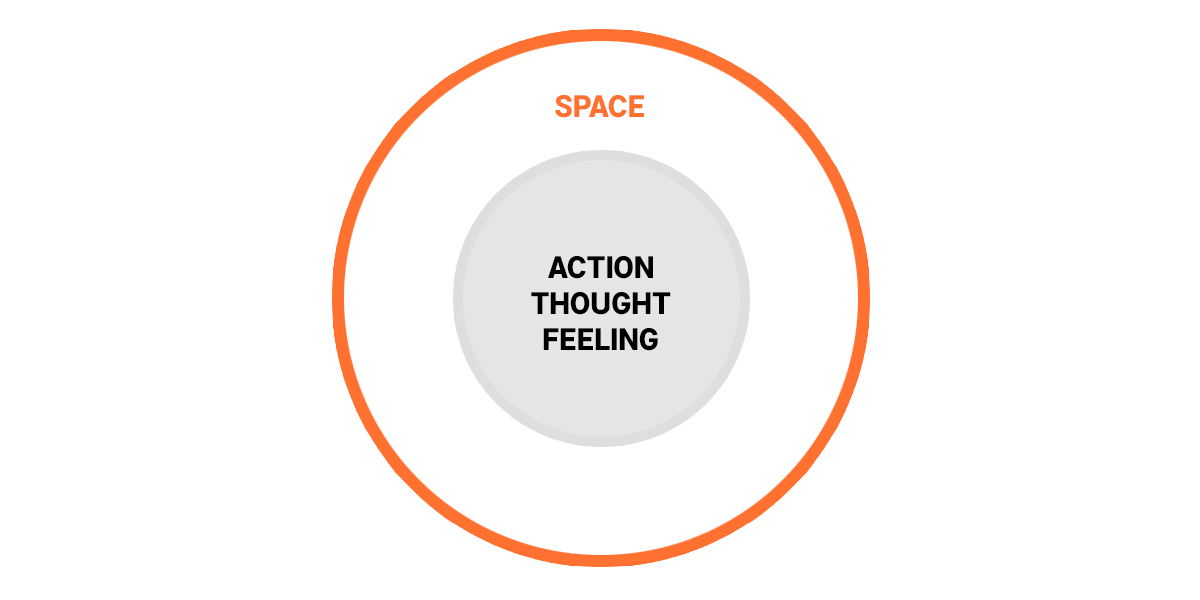 That somethingness can be an action, a thought, a feeling, or a task. It’s something you think, feel, or do.

Without space, everything becomes a lifeless string of repetitive events. One event leads immediately and inevitably into another. The past cannot help but repeat itself.

But when we create space, everything changes.

It’s the “freedom and space to hear things,” as Miles Davis said. You begin hearing the signal beneath the noise, the ideas beneath the surface, the creativity that lies dormant within.

With space, you have the freedom to shift your tempo, adjust your rhythm, and recalibrate based on what’s in front of you. You have the behavioral flexibility to adapt to your environment and work with it, instead of fighting against it.

It’s space to listen, to adapt, and to bring the unknown to life.

“In order for something of quality to take place,” wrote theatre director Peter Brook, “an empty space needs to be created. An empty space makes it possible for a new phenomenon to come to life…No fresh and new experience is possible if there isn’t a pure, virgin space ready to receive it.”

The fear of space

Most of us have a chronic space deficit.

We’ve stripped every last bit of space from our internal and external realms. We rush from task to task, from meeting to meeting, without pausing to breathe or to think. Even when we get an unexpected break in our schedule, we always find a way to drain that precious space away.

Because we are scared of space.

Space might sound like it’s open and airy. But to actually give yourself space—the space to really pause, to really think, to really feel—means confronting unknown and often uncomfortable realizations.

Although these inconvenient realizations might sting, you are finally confronting the truth.

This is creating space. It is a practice of seeing truth, and being with it.

Space can take several practical forms. It can be a mid-morning break. It might be the briefest of moments, where you step back from your thoughts and view them from a distance. Or it could even be a long-term sabbatical.

Whatever it looks like on the outside, creating space must start on the inside, first.

If you’re dependent on the external environment—your location, noise levels, the weather—then you’ll become a slave to those conditions.

The only space you will find on mountaintop is the space you choose to bring there, after all.

How do you create space within?

Saying OK is the act of acknowledging what is happening around you and within you. It’s the choice to meet and receive the observable facts of reality, without judgement or condemnation. No matter what is happening, you choose to say OK.

This is not the same as saying “it’s OK.” It’s not a question of supporting or condoning actions that contradict your morals or that hamper performance. It’s not about supporting evil actions or becoming a couch potato.

Instead, it’s about acknowledging and respecting that what is occurring is, in fact, occurring. What is happening is happening.

And by noticing and acknowledging your reality, you create space to think, feel, and act.

If you’re tired, you say OK to being tired. You don’t plow on, disregarding your state. You say, “OK, I am tired.” And then you adjust what you are doing and how you are doing it.

If you’re scared of making a tough strategic call, you say “OK, this is difficult for me. I can feel the weight.” You say OK to the fear of what might happen if you make the wrong call. And then you open up, ask for help, and move forward.

If you’re treated unfairly, you say “OK, this injustice happened.” You might not like that it happened, and you might not think it’s OK in any moral sense—but you say OK to the truth of what occurred. And then you proceed to take action from there.

Saying OK is an act of inclusion. It’s the conscious choice to include the reality of what is happening around you and within you.

When we don’t include, we deny reality. And if there’s anything that reality despises, it’s denial.

We have a well-worn toolbox of denial. Avoidance. Post-hoc rationalizations. Elaborate stories we tell ourselves about ourselves. Even outright lies.

These strategies of denial served a purpose once upon a time in our lives: they kept us safe, kept our identity intact, and made sure we belonged. But since their sell-by date has long since expired, our denial does nothing but keep us frozen in a past that is no longer here.

As we deny, we resist—and what we resist, persists.

And so saying OK means catching up with yourself. It means saying OK to past and current troubles. You say OK not only to the lights of happiness and joy, but to the dark and resisted depths of pain, grief, and fear, too.

“I made a decision a long time ago,” says author Elizabeth Gilbert,“that if I want creativity in my life—and I do—then I will have to make space for fear, too. Plenty of space.”

By saying OK, you create space. By surrendering to your reality, tensions deflate and new horizons open up.

“As long as we are trying to figure out how we can escape from our present situation,” said Chogyam Trungpa, “we can’t notice much about it. Only when we feel that this is it, this is how it is right now, without any clutching toward something different, will our intelligence really come alive.”

Only when we’re able to say “OK, this is how it is right now,” then—and only then—are we ready to look and move towards the future. Only then do we have the space to ask ourselves what we would like our future to become.

When we create space, we’re not only opening ourselves up. We’re doing the same for others, too.

When other people complain, it’s easy to take the bait. There are few things as seductive as competing in a round of “Who’s right?”. We swing swords of agreement or disagreement, jousting with blows of “Yes, you’re right” or “No, you’re wrong” until a winner has emerged.

The problem with competing in a battle of “Who’s right?” is that it doesn’t start with acknowledgement. It disrespects reality. It diminishes, squashes, and constricts those who get involved.

Great leaders start by saying OK to their peoples’ experiences and feelings. While they might not condone or agree with others’ behaviors, they unconditionally respect the other person’s experience. They say “OK. I receive you.” And then they act.

It might seem like the smallest, most semantic of details. But when leaders fully acknowledge and respect their people’s experience, tension dissolves. The atmosphere of frozen fear melts into a flowing river of movement, innovation, and action.

Leaders that create space are walking embodiments of being available.

It simply means that they are unconditional in receiving other people. Since they’ve done their own inner work to create space within themselves, they are open and available towards others, too. They unconditionally receive their team by first saying “OK”, and then proceed to act accordingly.

They create an environment of psychological safety. Their team doesn’t need to waste energy on hiding, denying, or trying to look good for their leader. Instead, the team knows that they can show up with whatever is true at that moment.

By being comfortable in the discomfort of reality, these leaders create space for creativity, flexibility, and innovation.

They create space for people to grow.

Space is not a new concept. Yoshida Kenkō, a 13th century Japanese monk, wrote that:

“When a man is cramped for space, he is broken and crushed. When the activity of the mind is constricted and rigid, a man will come into collision with things at every turn and be harmed by disputes. [But] if you have space for maneuvering and are flexible, not one hair will be harmed.”

Space creation is not a new concept in leadership, either. According to Master Nan Huai Chan, the ancient Confucian leadership principles state that:

“If you want to become a great leader, you need to go forth into these seven meditative spaces…awareness, stopping, calmness, stillness, peace, true thinking, and attainment.…Before you can become a leader you have to understand yourself, you have to be sincere in your heart, you have to be unbiased.”

Space creation is a timeless act.

And it is a timeful act. By acknowledging our past sorrows, our current fears, and our future dreams, all right now, we open a portal to traveling through time without having to leave the present.

By creating space, we release the well-worn shackles of self-imposed limitation, and set free all that has been waiting to emerge.

And it starts by saying “OK”.